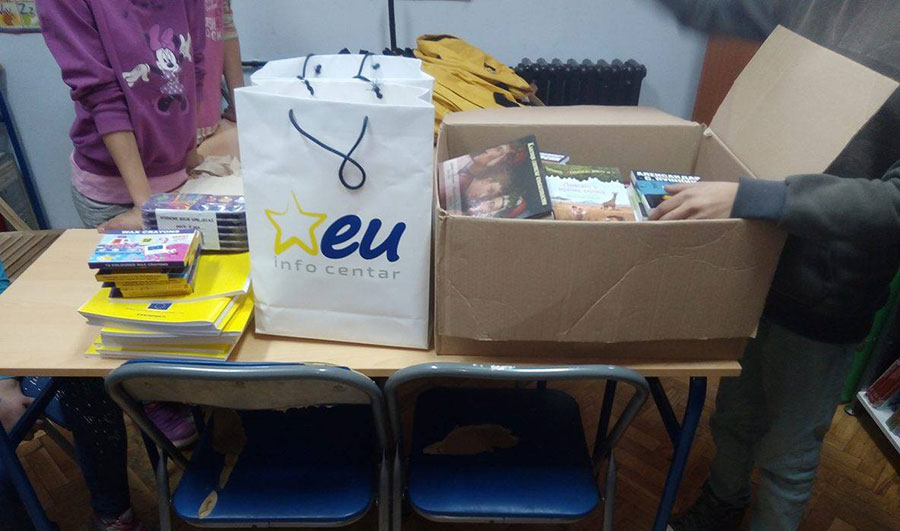 The number of books at the presumably most recently-opened library in town, the one at the Children’s Shelter, has just increased: Harry Potter books, Nusic’s “Suspicious Face” and the works of Jules Verne are as of recently part of said library and at the disposal of Shelters’ beneficiaries.

The books have been donated by the EU Delegation, the EU Info Centre, the National Library of Serbia and Eptisa company which had joined forces to turn the efforts of the 14-year-old Enver, who created the place from virtually nothing – a few boxes and crates – into a genuine library.

Enver can barely hide his satisfaction with the fact that his library now has a shelf filled with new books. His, and the attention of other children, is turned to other items of EU donation, as well: notebooks, crayons and sketch pads to be used by all of them.

The Children’s Shelter in Novi Beograd, Arsenije Carnojevic Boulevard, is visited by tens of children every day. They study, eat and hang out with their peers there. This is one of two shelters in Belgrade whose operation is supported by city authorities and everyday donations made by everyone from individuals to companies.

Being engaged in library section at the Shelter, Enver spearheaded the initiative to set up a library. Dexterous and open-minded, he managed to quickly turn his idea into reality so what once had been boxes soon turned into shelves while the number of books began to grow.

Enver’s wish was to visit the National Library of Serbia. Following a visit by EU Delegation and EU Info Centre representatives during the New Year holidays, a deal on how to grant him this wish ‘was struck’. 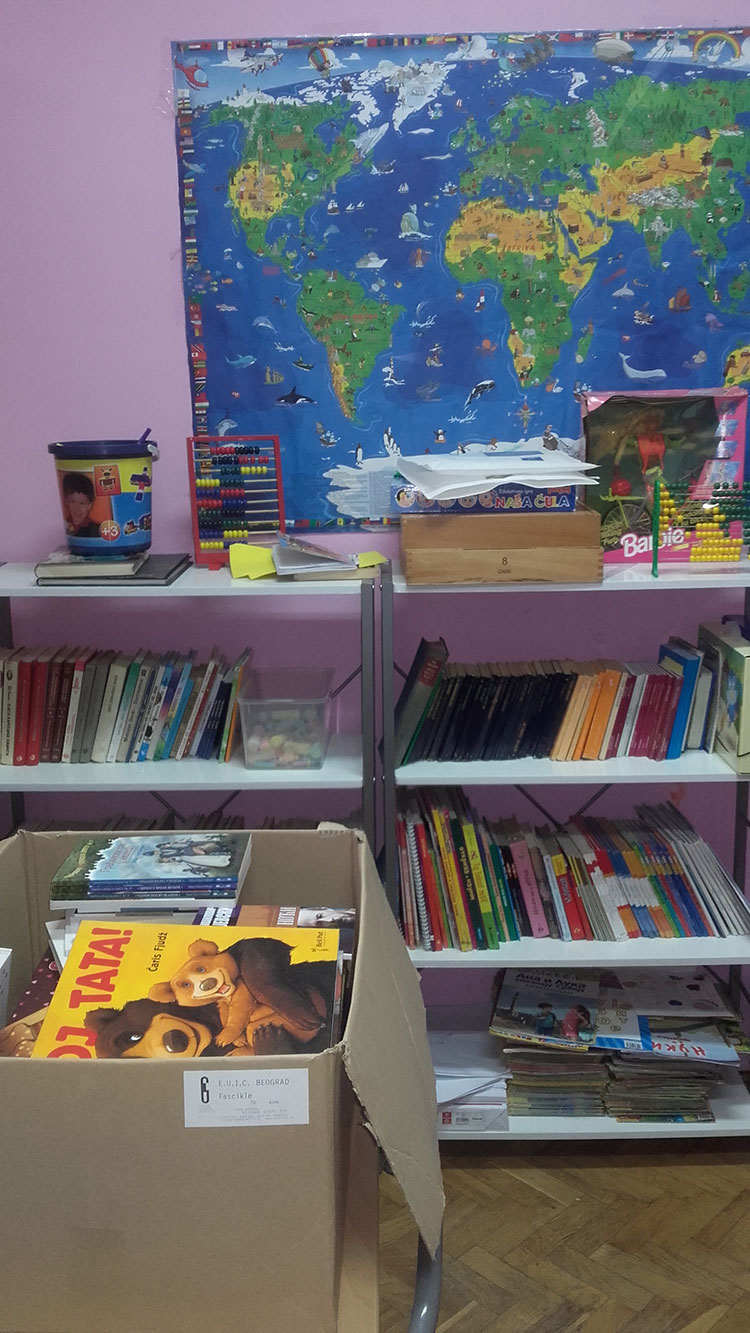 First time at the Library

The visit to the National Library of Serbia by Enver, Ramiza, Ljiljana, Maja and Danijela, as the first ever visit to the Library by children from the Shelter, was arranged by the EU Delegation and the EU Info Centre. They were welcomed by Ivana Nikolic and Tamara Butigan, who are to be thanked for the donation and the organisation of the visit.

After being briefed on the history of the Library, the guests from the Shelter toured the archaeography department where they saw the copies of some of the Library’s oldest books, including a copy of the “Miroslav Gospel”, learned more about the production of books in medieval times and how to read Old Church Slavonic language. They were also offered to attend drawing lessons and a course in Old Church Slavonic in summer.

The group, led by Emir who wanted to learn as much as possible, also toured the reading room, the electronic data base room and stockroom. Enver and Ramiza discussed the inventory with the Library staff as if they were their colleagues. They said they were compiling it the same way at “their school library.”

“I have never been to a library like this before. We have a library as well, but a rather small one,” says Maja a fourth grade student.

Enver the librarian: I choose book over phone

The question of whether books should be read on cell phones was provoked: as a genuine librarian, Enver prefers books printed on paper over e-books because, as he put it, “the cell phone instantly makes me want to play video games.”

The children were thrilled to see the stockroom, with sets of shelves filled with books and showed their satisfaction by shouting ‘awesome.’ Then they entered the book conservation department where, according to them, the books were ‘healed’ and were all ears while listening about the process of book conservation.

The children left the Library unwillingly but deeply impressed.

The organisers from the EU and the National Library of Serbia have immediately started planning another visit in order to bring as many children as possible closer to the Library.

Giorgio Fruscione, an intern at the EU Delegation, was also impressed. As he put it, he was not expecting to see that “something as old as those books or the dusty stockroom” could arouse so much interest among children. 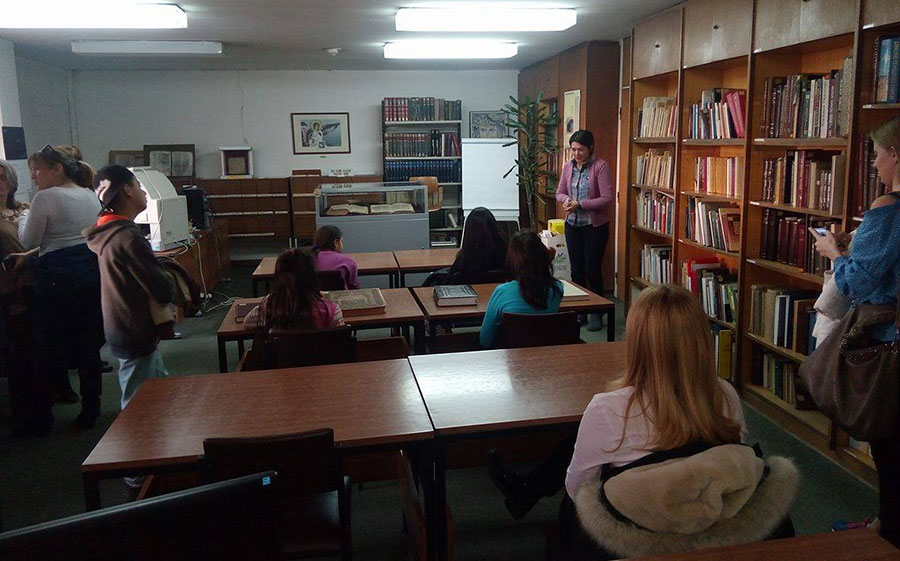 “I believe that the best thing the Shelter does is bringing kids, who come from disadvantaged backgrounds, closer to education, school and general knowledge, sparking their desire to develop,” Giorgio says.

Enver and Ramiza agreed with Giorgio and, after they had heard about the fire at the Library, said “The Library burned down but you did not give up!” and thus expressed their own attitude towards life.

The Shelter is visited by children aged 5 to 15 years living and working on the streets of Belgrade; some hail from the so-called unofficial settlements. At the Shelter, they can rest and spend quality time, maintain personal hygiene, have a proper meal, educate themselves and get support in acquiring basic skills as well as take part in various creative activities. EU support for the Shelter is channelled through the project “Shelter for children involved in the life and work on the street in Belgrade” which is a part of the wider programme of EU support for inclusive society.