The project, funded by the European Union and managed by the Council of Europe Development Bank, aims at the provision of durable housing solutions for the refugees and internally displaced persons (IDPs) after the armed conflicts in the Western Balkans during the nineties. 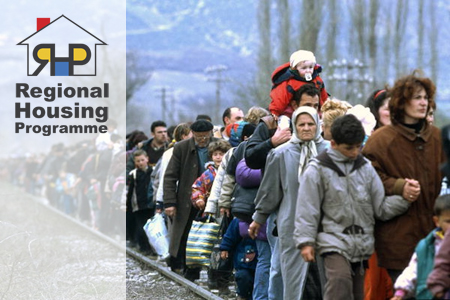 Over three million people were displaced within and beyond the borders of Bosnia and Herzegovina, Montenegro, the Republic of Croatia, and the Republic of Serbia as a consequence of the armed conflicts that severely hit the region in the period 1991-1995. While over the past two decades the majority of them have returned home or have found other durable solutions thanks to the immense efforts made by their national governments and to the solidary support of the international community, almost half a million have remained displaced throughout the region without having found any durable housing solution yet.

In order to alleviate this situation, in March 2010 representatives of the governments of the four countries met in Belgrade for the Ministerial Conference on Durable Solutions for Refugees and Displaced Persons. The Conference helped in re‐establishing cooperation in order to facilitate the provision of a too long awaited durable housing solution.

As a crucial step in this process, a Regional Programme was planned to address the housing needs of the most vulnerable population. This Regional Housing Programme targets 74,000 people or 27,000 households and, with an overall budget of almost 600 million Euro, aims at contributing towards the completion of the protracted displacement situation in the four partner countries by providing durable and sustainable housing solutions either through voluntary return and reintegration, or by means of local integration.

During a related Donors’ Conference held on 24th April 2012 in Sarajevo, many countries made pledges and the Programme finally became a reality. In total, these Donors pledged to provide 261 million Euro in grants, of which 230 million Euro were assured by the European Union.

In parallel, the European Commission also reached a decision to provide funds for a technical assistance that would support the beneficiary countries during the implementation of the overall Programme, the “Technical Assistance for Formulating the Feasibility Reports and for Implementing the Country Housing Projects”, managed by the Council of Europe Development Bank. A joint venture led by EPTISA resulted awarded with its implementation after an international restricted tender.

In the next four years, a consortium composed by EPTISA, Deutsche Gesellschaft fur Internationale Zusammenarbeit (GIZ), and the Danish Refugee Council (DRC) will support the efforts of the donor community and the four beneficiary governments in resolving the prolonged displacement situation of the most vulnerable refugees and displaced persons.

Our team of experts will provide substantial assistance to the national Project Implementation Units in the four partner countries in (1) finalising the preparation of the specific Country Housing Projects within the joint Regional Housing Programme, and (2) in their subsequent implementation so as to provide sustainable housing solutions in line with the best international practices and for the benefit of those most in need.

The consortium partners and the whole expert team feel very proud and honoured to participate in this praiseworthy initiative supported by the European Union and other members of the donor community.

For more information about this project, please contact EPTISA Regional Office for Southeast Europe at eptisasee@eptisa.com or visit the website of the Council of Europe Development Bank at www.coebank.org